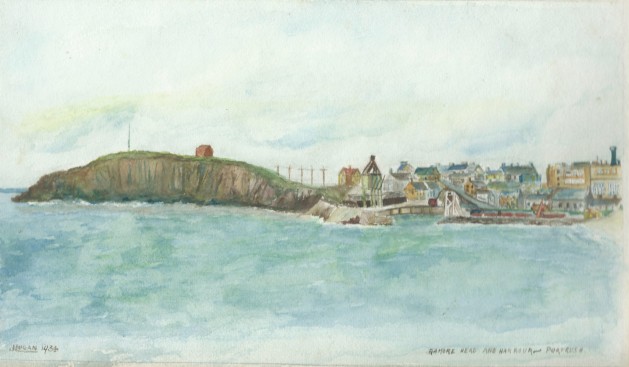 I offer you a 1934 watercolour of Portrush, County Antrim, Northern Ireland, by my father, Jack Logan. He was 19 years old at the time and he died a very untimely death in 1952. I was ten years old. This painting means so much to me.

My father was a native of Portrush and a self-taught artist. In this work he captures the character of a seaside town and working port of the 1930s and 1940s, when my own memories of Portrush began to develop. In this work I can see the town’s characters, Johnny Logan (my grandfather), Davy Wilson, Spud Fleming, and Bobby McMullan standing at the “harbour head.” They’d have been discussing such matters as the decline in the skate (a type of ray) population, the fact that the County Down fishing boats were spending more time in County Antrim waters, and so on…

My father’s painting developed over the years in terms of range of themes where the city of Derry/Londonderry and County Donegal became as popular as Portrush. My father’s painting style became much more bold and adventurous. He captured a typical Irish sky with apparent simplicity, but with remarkable accuracy.

Portrush remains a place apart, a place to which I resort when my spirits need raising. My father, Jack Logan, was, to quote a recently deceased Portrush friend, “a remarkably skilled and popular person,” and one whom I wish I had known better. 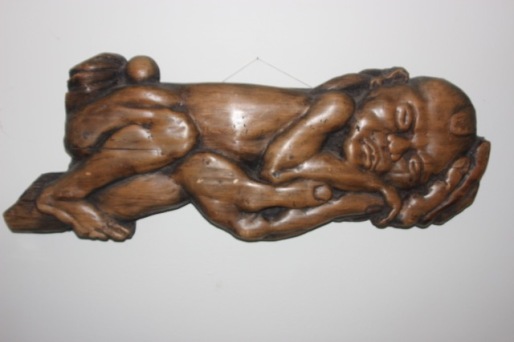 I bought this sculpture in 2007, when I was working as a volunteer in a teachers’ college in southwest China. When I bought this piece, the artist had recently graduated. He was living and working in a very dilapidated and unsanitary house by a river that would overflow during the rainy season. The artist lived there with his wife and his newborn. He sculpted this piece as a memory of the first time he held his son, just a few seconds after the baby was born.

At that time, my husband and I had already bought some of his sculptures. Even though I had no children yet, when I saw this tiny baby peacefully resting in strong yet tender hands, I saw the love and beauty that such a moment could inspire. I asked how much he wanted for it. The artist said he didn’t want to sell it because he was too attached to the memory.

I came back a few weeks later and saw the artist’s son had developed a terrible rash. The artist and his wife thought it was due to the dampness in the house and they were extremely worried. The artist told me he would agree to sell me the sculpture of the baby if I still wanted it. I said yes. As soon as I paid for it, he gave the money to his wife who rushed their baby to the local hospital.

Now I am a mother. When I look at this sculpture I think of them, I think of all the parents, some who live in very difficult conditions, and I see the love and beauty that children can awaken in us. When our first child was born I still remember my husband holding our son in this exact same way.